THE ALLIED FORCES OF AUSREENACT 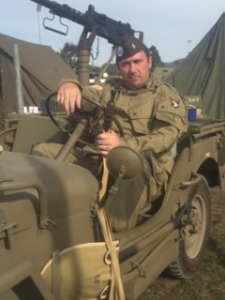 1st LT Dalton was a butcher in his home town of St Cloud Minnesota, he decided to enlisted in 1939 after seeing what was taking place in Europe.  He volunteered for the paratroops in September 1940 as part of the original US Army airborne test program, and joined the 101st in June 1942.  The LT can normally be found leading the members of Dog Company on a patrol, laying an ambush for the enemy, or leading his men into mischief. Like all airborne officers he believes in leading from the front.  He can often be heard saying “here we go again boys” as he leads his platoon forward.  Being older than the average trooper, he has a wife and young child back in St Cloud. Once this is all over he plans on returning home and opening his own butchers shop. 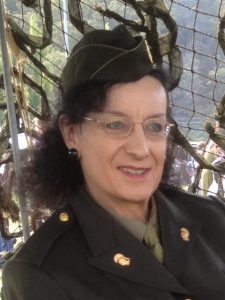 Kathy grew up in Albuquerque, New Mexico with her younger sister coming from a Military background with her father having served in the Army. After graduating from High School Kathy started work as a laboratory assistant at Sandia National Laboratories. In the aftermath of the attack on Pearl Harbour Kathy enlisted with the newly formed WAAC and received basic training at Fort Des Moines Provisional Army Officer Training School in Iowa. Kathy specialised in mechanics, and by the time Kathy was posted to Europe in 1943, the branch was no longer ‘Auxiliary’ and became the WAC.  Kathy was assigned to 101st Divisional Command Post at Greenham Lodge, near Newbury in the months before D Day, this being the first time she had travelled outside the USA. 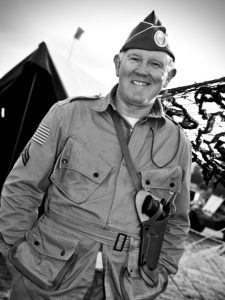 Cpl Morrow was born and raised in Scotland but had emigrated to the US in 1938 with his wife and two daughters and lives in New York.  When the news came in May 1940 that both his older brother and uncle, members of the Argyll & Sutherland Highlanders, part of the 51st Highland Division were killed at Abbeville France in late May covering the withdrawal of other troops at Dunkirk he knew he had to get involved in the war somehow.  Practicalities prevented a move back to Scotland so Vic joined the US military in 1941.  After hearing about the formation of an Airborne Unit he immediately applied for a transfer and was accepted as the chance to get stuck into the Krauts looked more immediate in the Airborne.  Being much older than almost all of his Comrades it was a hard struggle but he eventually qualified in July 1942 and was quickly promoted to Cpl.  Always up for a fight and always looking to revenge the death of his brother and Uncle 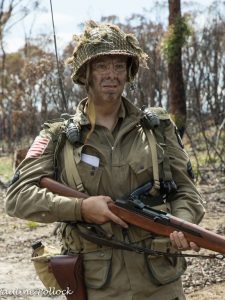 Alex was born on 02/02/1920 from Argentinian parents who migrated to USA in 1910.  Before the war, he graduated from high school and got a job as a line worker at Douglas Corporation installing radios on aircraft. Alex has a gal back home, Claire, and he carries her photo in his wallet; they are planning to get married when the war is over (hopefully soon!).  Despite his mother’s opposition, and anticipating the draft notice, Alex enlisted in the Army in 1940 and volunteered for the paratroopers. He went through the regimental unit training and pre-airborne training at Camp Toccoa, Georgia. He also received some specialised training on the radio transceiver. Alex was shipped to England in late 1943 and appointed as a radio operator in his platoon. 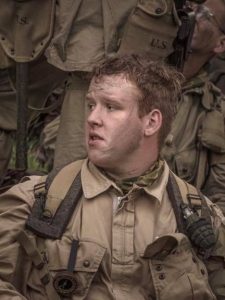 From Scottish descendants, Brodie was working as a line worker for Goodyear tires when the bombing of Pearl Harbour occurred and joined up for the war effort in the recruitment centre in Cleveland, Ohio in February 1942. He volunteered for the paratroopers on the premise of extra pay. “Although I won’t go far without my trusty M1 Garand rifle, one will normally find me straying towards using more explosive or rocket propelled means of disabling enemy placements.”   Brodie’s favourite team is the mighty Columbus Redbirds and he wears the teams ballcap whenever he can to remind him of home. He is single but has a gal back home and might pop the question if he makes it back stateside. 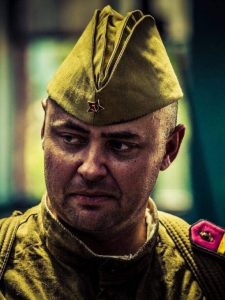 Yuri Petrov  was born and raised in the Kirovsky District, Leningrad, USSR. He is veteran of the Russian Civil War having enlisted as a teenager in the Red Army to fight against the White Army in 1919.  Finding life tough after the great revolution, and hating school, Yuri started working in the Zavod Krashny Putilovets factory first as a cleaner then as a line worker assembling the Fordzon-Putilovets tractors. He met his fiance Olga in the factory cafe and they started to plan their wedding and future life together.   That was however, interupted when Yuri was conscripted into the Red army and found himself as part of the victorious forces that liberated Poland from capitalism.  But now Yuri is a hardened soldat  fighting in the Great Patriotic War against the German juggernaut war machine. ” I believe that Mother Russia will be victorious, and it has to be…. as the fate of Russia and the World Depends on it! Comrades, Forward!!!!!” 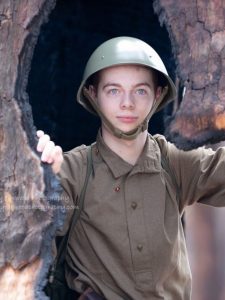 Before the war, Georgy was working on the land assisting in potato harvest and looking after dairy cows for the local Agricultural Cooperative.  This would give him a good background to eventually enrol at the Orel State Agricultural Academy. In 1941 Georgy was conscripted just before Operation Typhoon into 84th Regiment, 6th Division, 13th Army, Bryansk Front to defend the motherland. Engaged more in partisan activity when the army was on the verge of collapse, his unit was surrounded by Guderian’s panzers but managed to escape to the east and rejoin other dislocated units. His Father Alexeandre is also in the Army fighting at Leningrad while his mother Mariya has been evacuated to Moscow.  Georgy’s sister Sasha is a nurse working somewhere in Stalingrad – ” I write to Sasha often but I am not sure if she is still alive.  I have to believe that at the end of this war, we will all be reunited and able to rebuild Orel”.