THE AXIS FORCES OF AUSREENACT 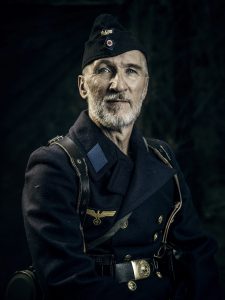 Heinrich joined the Deutsche Heer as a young conscript in 1915 seeing service in Ypress and Verdun in France before being medically discharged as a gefreiter in 1917.  His parent were financially ruined during the great depression but recovered with his father working first in the Stats Polizie then in the Ordnungspolizei. His father’s struggle to maintain the family together, instilled a considerable work ethic and discipline in Heinrich’s approach to life. Working as an electrician in the Bremen shipyards, Heinrich married Anna in 1925 and joined the Kriegsmarine as a Reserve in 1933.  Activated in early 1940 Heinrich was assigned to the Kusten Artillerie and was originally stationed at Brugge, Belgium. “The Kameraderie makes up for missing home and my family”.  He is currently stationed at Saint Marcouf in France responsible for the coordination of the Crisbecq battery plot and initial ranging of enemy ships using the Entfernungsmesser. 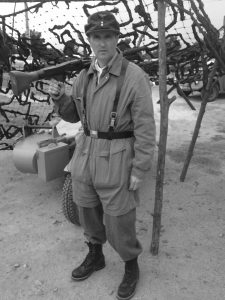 Gustav Becker came from a poor farming family of eight. Military service offered a better life, double pay for fallschirmjagers and prestige was attractive so as a consequence, he joined the fallschirmjagers in early 1939 at the age of 38 years.  Gustav took part in the campaign in Poland as part of the land based forces. His first operational jump was in Belgium on 10 May 1940 as part of FJ Regiment 1 sturmgruppe Stahl to secure the road bridge at Veldwezelt.  He also took part in the first entirely airborne military action to capture Kreta from British and Greek forces, luckily  surviving the fighting in Greece. He jumped on 20 May 1941 at Heraklion, which was a bloody campaign and many comrades were killed. Gustav served in Afrika under Kampfgruppe Burckhardt from early 1942 and later under brigade Ramcke at El Alamein where he escaped from encirclement. He left Tunisia before the collapse and participated in the defence of France at Normandy during the D Day invasion as part of the 6. Fallschirmjägerregiment.

Sepp Volker was born on November 13, 1886 in the East Prussian city of Allenstein. He became a junior school teacher and after a period of national service, became a member of an army reserve unit.  Upon mobilisation in August 1914, he served in the Landwehr Corps under General der Infanterie Remus von Woyrsch. This corps was part of the Imperial 8th Army.  Severely wounded by shrapnel in the back and leg during the Battle of Tannenburg, he was invalided out of the military in 1915 and later that year resumed his teaching career in a small community to the south of Allenstein where he and his young family eventually settled.  Unable to serve in WW2 due to the effects of his earlier injuries, he was nonetheless sworn in as a member of the local Volkssturm in December 1944, not long after his 58th birthday. His duties currently consist of office work at the local train station and occasional guard duty there.