The club was formed in 2000 with the aim of providing an avenue of expression for those with an interest in the history of the Second World War with a particular focus on Eastern European theatre. For many, this interest developed through a love of movies, books, music or hobbies such as model-making, while for others such as educators or students, it may have been on a more formal level.

The group’s first public event was the Military Vehicles’ Day at Corowa on the New South Wales / Victorian border. Here, one of the founding members exhibited German period uniforms and various WW2 items, the most notable a Zundapp DB200 motorcycle.

Also in that same year members attended the Historical Timeline event at Old Sydney Town. Its many period-style buildings provided an ideal photographic backdrop for displays. Here too, as with Corowa, was the perfect opportunity to present a variety of uniforms, field gear and personal kit as well as the opportunity to answer questions from curious visitors.

Other Living History display opportunities for the club followed, with attendances at the Highlander event in Goulburn, Military Heritage Day (Moorbank), Antique and Arms Fair (Canterbury and Penrith), as well as fairs and hobby shows at Moss Vale, Camden, and Blacktown. By now membership had grown to include both Russian and American 101st Airborne impressions. 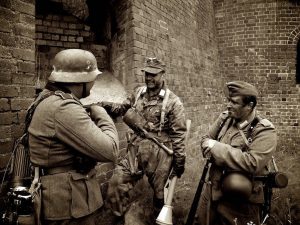 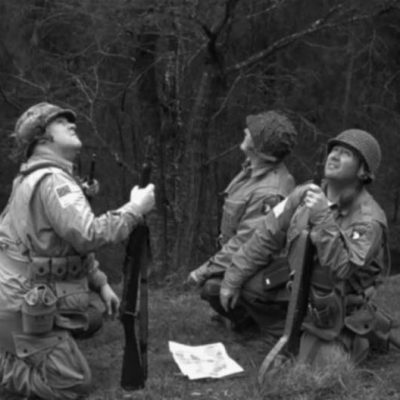 While some of these events no longer take place, they have been progressively replaced by others such as Lithgow Ironfest, Military Muster (Menangle) and the Marulan Kite festival.

The Living History events have been complemented by tactical and training days or weekends. These have helped to engender a spirit of camaraderie through the shared experience of field conditions: they provide the opportunity to practice drills and tactics, create scenarios, and simulate combat conditions. And of course there is the chance to make some noise with blank firing. Private acreage at Tarago provides the club with a European like venue of tall pines which provides an authentic feel to these events.

The club interacts with other similar interstate clubs to participate in tactical events.  These are usually several days and generally well organized with personnel of opposing forces, vehicles and pyrotechnics.

Most of the above have become regular features of the club’s calendar. They are perfect opportunities to meet with fellow re-enactors and enthusiasts to exchange ideas and share in their passion for Living History……and have some fun while doing it.