Click on the pictures to see who makes up our Forces. 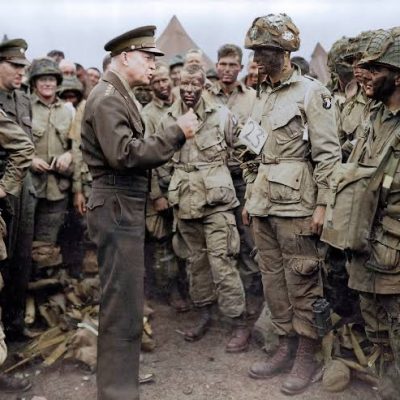 The majority of the clubs American impressions are based on the WW2 US 101st Airborne Division reformed in August 1942 and based at Camp Claiborne, Louisiana.  Originally the Division consisted of two Glider Infantry Regiments (327th GIR and 401st GIR) and one Parachute Infantry regiment (502nd PIR), they were joined by the 501st PIR and 506th PIR.  In October 1942, the Division moved to Fort Bragge, North Carolina where the entire division was collectively housed and continued consolidation training.

In September 1943, the division departed the USA for the European Theatre of Operations. Once in England , the Division continued to train in infantry tactics and continued jump training ready for the day to jump into Fortress Europa.  And they did so on 6 June 1944 with the invasion of Normandy and the subsequent unsuccessful invasion of Holland in Operation Market Garden.

The Division became well known for their actions in the Ardennes Forest in Belgium, in an action that has become known as the battle of the Bulge.  By 1945, the Division had fought its way through Germany with men of the 101st the first troop to reach Berchtesgaden, Hitler’s Alpine retreat. In the latter half of 1945, the Division was deactivated.

Ausreenact American impressions extend to 41st Infantry Regiment of the 2nd Armor Division.  In addition to the the Americans, Ausreenact has Russian impressions based on the 84th Regiment, 6th Rifle Division of the 13th Army.

The German impressions are a little more varied than those of the American Forces.

By 1944, the toll of fighting on multiple fronts combined with the loss of significant men, including the capitulation of the 6th Army at Stalingrad, meant the German Forces were a shadow of their former self. The short resurgence of the German forces at the Battle of the Bulge was probably the last time a cohesive counter offensive was mounted.

By early 1945,  the Luftwaffe was decimated, the Kriegsmarine had few ships and there was reliance on foreign Divisions as well as  the Volkssturm (or Dad’s Army) on the home front.  As such, the German impressions are a similar eclectic mix of that could be found in the late war European theatre of operations.  Fallschirmjäger (paratroopers), Gebirgsjäger (mountain troops)  as well as Luftwaffenhelferin (Flakhelfer or Anti Aircraft gunner – an  auxiliary staff of the German Luftwaffe ) are also impressions that some of our members portray. 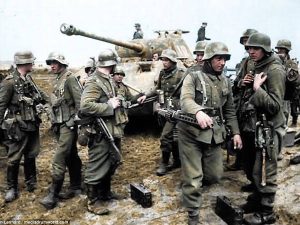