Members generally start with a basic kit and build on their impression.  As living historians, the need for accuracy is paramount and may result in a considerable amount of kit.

German Army (Heer).  A good layout of what a German soldier in the Wehrmacht might have as issue items.  There are duplicates in this muster and a few souvenired items. The second picture shows the back of a fully kitted out soldier. 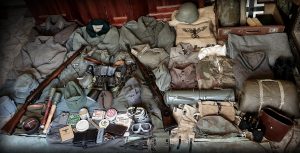 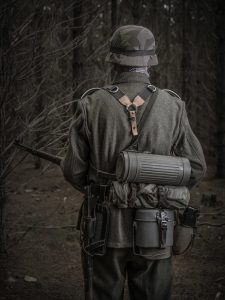 German Coastal Artillery (Küstenartillerie).  The Coastal Artillery was a distinct arm of the German Navy and manned all the coastal installations.  The uniform was very similar to the Heer but retained Naval buttons and gold rank and trade badges.

US – 101st Airborne.  Here is some of the US kit items laid out.   It includes the most of the items an enlisted trooper would have. 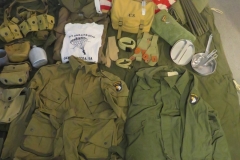 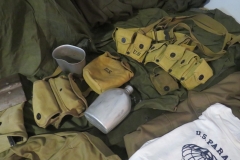 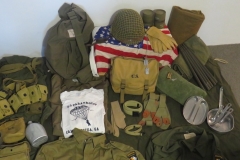